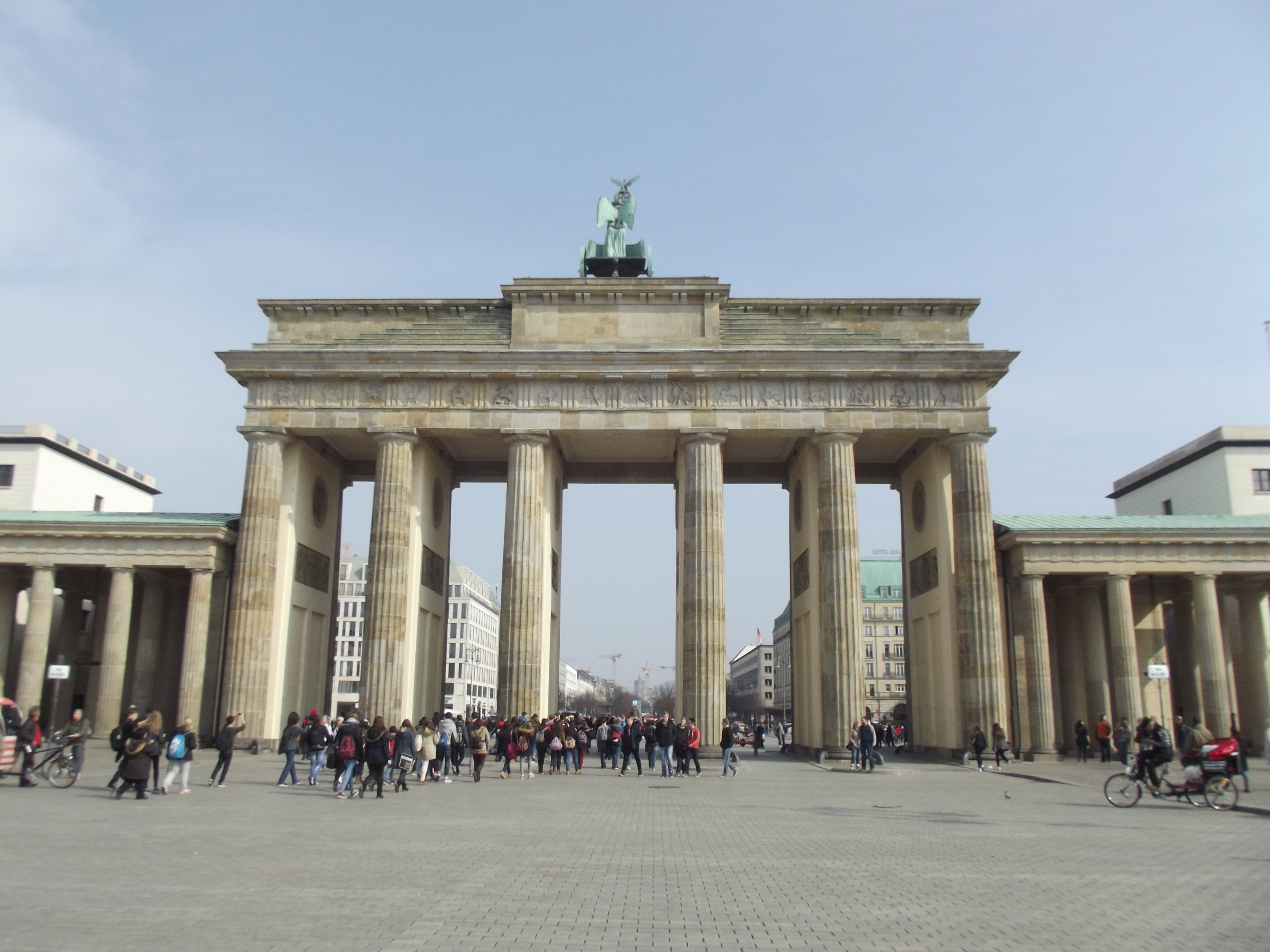 I flew out from Gatwick at 12:20 pm after taking the train from Southampton to Gatwick, via Horsham. I didn’t realise it went that way – I thought it went to the Brighton junction and turned north. At Gatwick, the South terminal, which is very impressive inside, is like a vast shopping mall with food and drink outlets as well, not dissimilar to West Quay. Luckily there was a Wetherspoon’s although even that was expensive!

The flight itself was in largely good weather, although there was some cloud here and there obstructing the view. The approach to Berlin was really interesting, as I could see all the lakes and forests surrounding the city.

Compared to Gatwick, Berlin Schonefield Airport was surprisingly modest. None of the usual vast retail space that you get with most of the airports that I have been to. I got the S-Bahn to Hermannplatz then the U-Bahn to Kottbusser Tor. Not the nearest metro stop to where I was staying but the next one along the line. I walked south and over the canal to near Schönleinstraβe station where I went in a local-looking pub – Bei Schlawinchen. This was a baptism of fire as it was full of bearded men drinking tankards of beer and smoking (yes, it’s not illegal in Germany). However, it wasn’t hostile and I would have gone back in there given the time, as it was the sort of place I was looking for rather than the gentrified touristy pubs in the city centre.

After checking into my room, which was within an art gallery and had some very retro furniture, I went for a walk to see if a nearby Biergarten was open but, not surprisingly given it was a Monday night in March, it wasn’t, so I went to Das Hotel, a lovely dimly-lit and quirky place where the staff were friendly and welcoming. I walked down to the lower end of Kottbusser Damm seeking more bars but all I found was a sports bar that was a cross between a betting shop and a pub. Finally, I bought some bottled beer in the off-licence that was literally next door to the entrance to my lodgings and had a pint in the pub/restaurant (“The Bird”) next door on the other side.

I started this morning by getting the U-Bahn from Schönleinstraβe to Hallesches Tor and I walked due north along Friedrichstraβe to Checkpoint Charlie, one of the most high profile border crossings between East and West Germany. Here, the East German border was to the north of the checkpoint and West Germany to the south. While it originally had a hut like the one pictured, it was actually upgraded over the nearly three decades it was in place so by the time the wall fell in 1989, it was a ten-lane checkpoint. I looked at an outdoor exhibition about the checkpoint, which was very interesting although spoiled by beggars collecting money “for the disabled”. If that is actually what they are collecting for then that is fine; however, I suspect this is an act designed to trick tourists. Before going to Checkpoint Charlie, I had a look at (from the outside) the Jewish Museum, which was fairly imposing.

After posing at Checkpoint Charlie for a photo with a guy dressed up as a US soldier, with a US flag, I continued my journey North and found a Kamps Bäckerei cafe, which offered a reasonable lunch so after stopping for some coffee and getting some essential sustenance, came to the expensive part of town, where the posh shops are (global brands such as Gucci, H&M, Timberland etc). I was amused about the fact that this part of town was in East Germany; the former Soviet leaders with an anti-capitalist agenda would be turning in their grave!

I then backtracked south to Unter den Linden, the grand avenue leading to the Brandenburg Gate (known as Brandenburger Tor in German). This is probably Berlins’s most famous landmark and like Checkpoint Charlie, a key border crossing between the east and west parts of Berlin. I managed to get a map at last from the adjacent tourist information centre. I have plenty of maps in a book back at my apartment but I only have a rucksack or nothing to carry it in so a pocket-sized map was very useful. Particularly as my mobile ran out of juice about the same time. 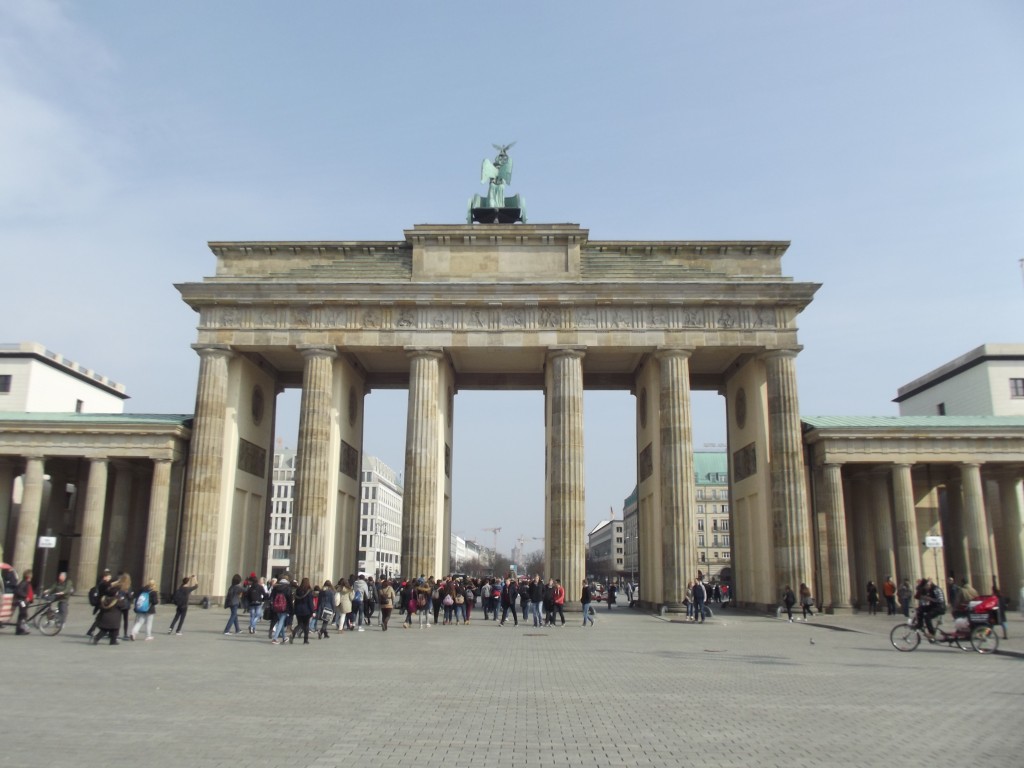 To the south of the Brandenburg gate, and where part of the Berlin Wall was is a large plaza full of stone slabs; this is a memorial to the Jews murdered in Europe. It felt very strange thinking that these atrocities took place here only 70 years ago. I then went in a bar and had a stein of lager. This was a strange place as there were no toilets and it was about a 50 metre walk along the road to get to the public loos, although the bar did give me a ticket to pay for the entrance fee.

After that, I went south to Potsdamer Platz, where part of the Berlin Wall used to be but now home to some high-rise office buildings. One of the most prestigious of which is the Sony Centre, which contains the Museum of Film and Television. I went in here and it was worth the admission fee.

In the evening, I went to Alexanderplatz and saw the Fernsehenturm (TV tower) for the first time. I then walked south via a restaurant where I had a beer but was the only customer and then Das Meisterstück, a gastro-pub that had an extensive selection of bottled beers.
.