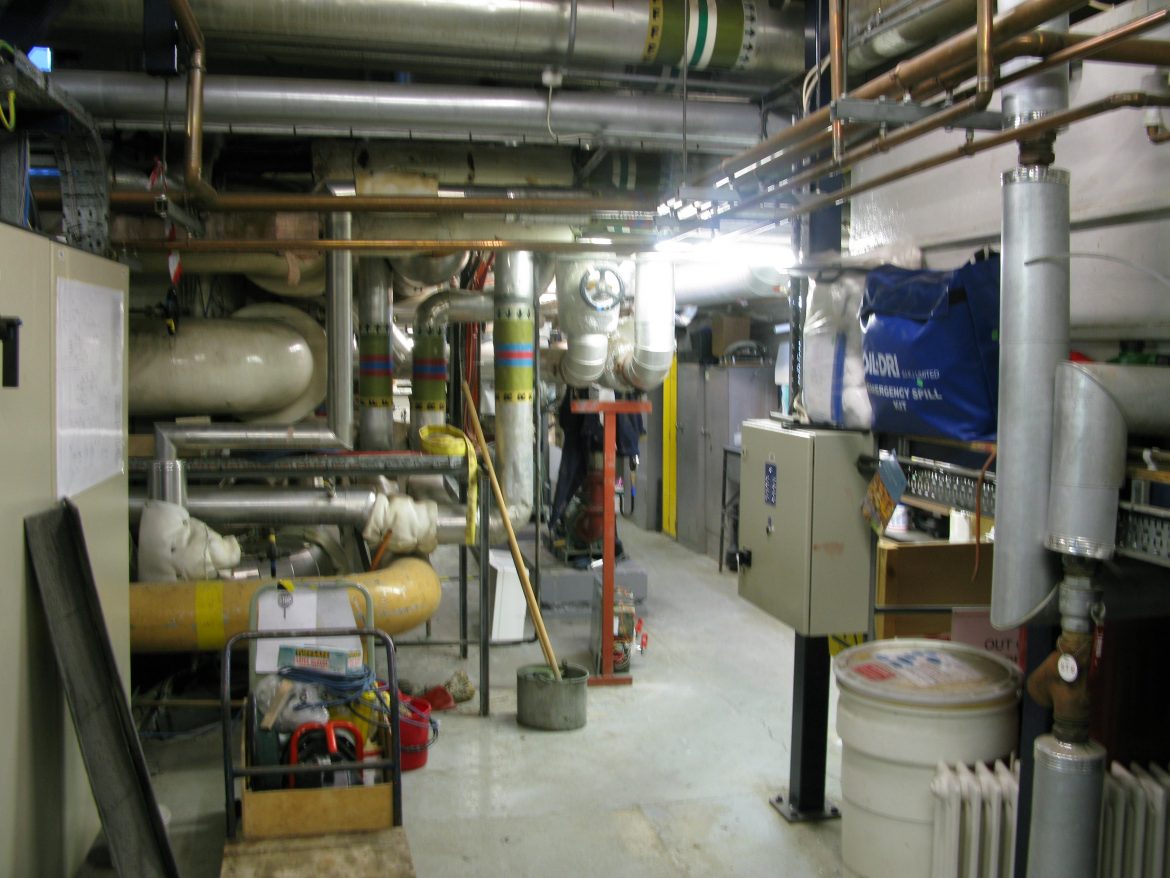 The Boiler House at Maybush was situated between the William Roy building (WRB) and West Block. It was a double-height structure on the LG and ground floor that contained the heating equipment for the whole Romsey Road site.

There were originally two large boilers and one small one. These were oil-fired and the heating oil was stored in several extensive underground tanks located below F core. It appears that these boilers were converted to gas or may have been dual-fired at some point in the 1970s.

In the 1980s, the boilers were replaced with three (TBC) slightly smaller ones and these were gas-fired from the beginning so the underground oil tanks were ‘mothballed’.

Around the year 2000, a Combined Heat and Power (CHP) system was installed in the Boiler House. The CHP could provide the normal heat demand of the building although two of the older boilers were retained for contingency reasons and to provide additional heat when the heating load was higher than normal.

The CHP system consisted of two Jenbacher gas-fired engines; essentially electrical generators that feed the surplus heat into the main heating circuits.  The CHP plant was  capable of generating more than half of the site’s electrical load when running at full capacity. During the warmer months, the CHP generated more heat than can be used, so heat had to be ‘dumped’ into the site’s cooling system. This would create an extra load on the cooling system, which would waste electricity so the CHP was either shut down or operated at a reduced capacity during those months.

Underground pipes from the Boiler House fed the WRB, Compass House, West Block, the Restaurant and Services Block. There were several large pumps in the area to the east of the Boiler House working in parallel so if one packed up then the service would continue.

As well as the main heating and chiller plant, the Boiler House also contained equipment for softening and treating the water. This ‘demineralised’ water is then used by various plant around the site.

The Boiler House originally contained some calorifiers (hot water cylinders
for producing the ‘domestic hot water’ that came out of the hot taps in washrooms and kitchens around the site).) but these are thought to have been removed when the CHP was installed (or it could have been before that in the 80s when the boilers were replaced).

While most of the Maybush site was naturally ventilated, there was a demand for air conditioning and cool air in specialist areas, such as the Print Floor, computer rooms and Business Centre. These areas were all fed air from outside via air handling units (AHUs) near to the work areas concerned, but the air was cooled by passing it through a heat exchanger containing chilled water. Like the main heating circuit, there was a network of pipes distributing chilled water from the Boiler House to the aforementioned AHUs around the building. The exception was the West Block computer room, which originally used chilled water but in around 2004 is was replaced with standalone chillers that provided cooling from roof-mounted fan-cooled units.

The Refrigeration Plant was located at the NW end of the Boiler House area, underneath the paved courtyard adjacent to the corridor linking G and H cores. It was a double-height area that contained the main chillers for the site and the associated pumps and electrical equipment, these were electrically-powered and work in the same way as a refrigerator. The heat extracted from the chilled water return circuit was disposed of via the cooling towers located within the rooftop penthouse above K core.