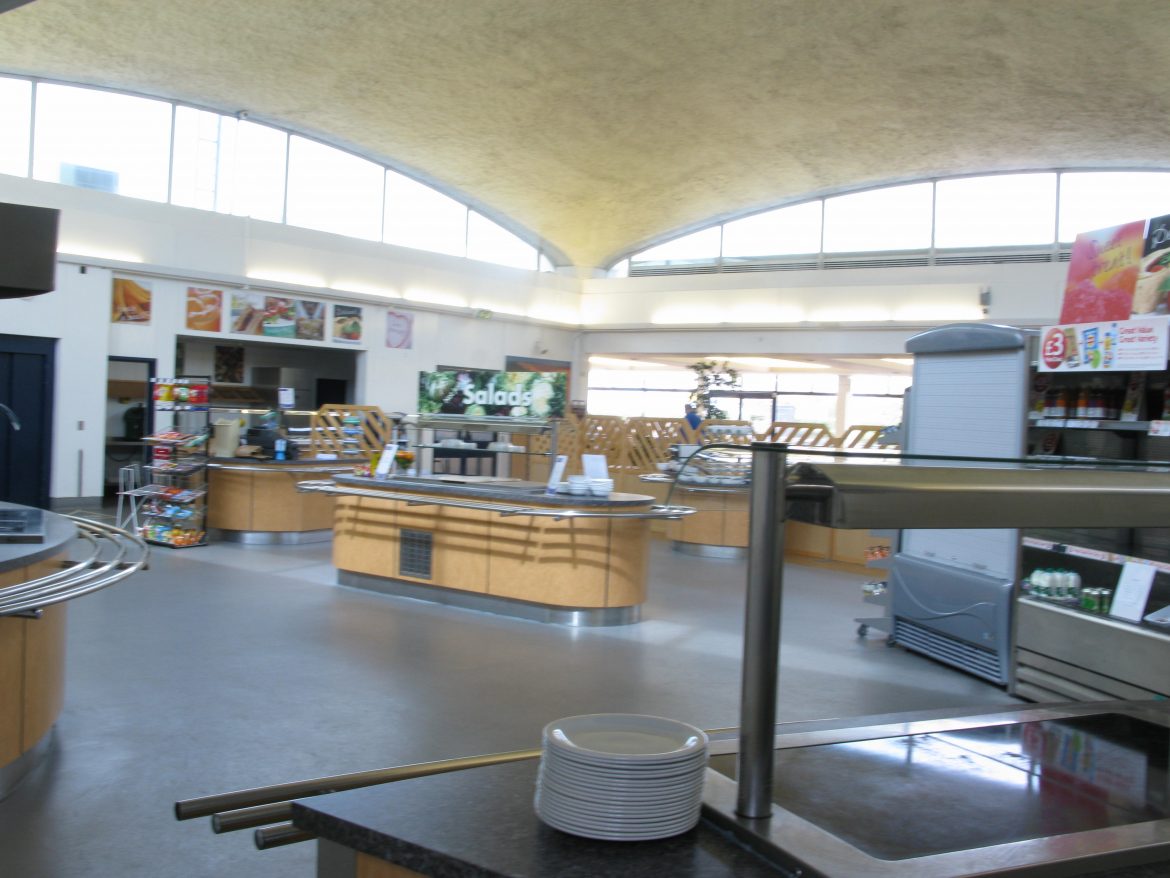 The Staff Restaurant, Maybush was situated immediately to the south of the William Roy Building (WRB) and was not connected except by the subway at LG level. It was a single-storey building (except for two small plant rooms in the basement) with the prominent feature being the large elliptical parabolic concrete shell roof over most of the dining area. It was considered a marvel of engineering at the time of construction. Such shell roofs were all the rage in the 1950s and 60s. The Restaurant roof was often referred to as a ‘dome’, although strictly speaking, it was not a true dome.

The building was designed in the days when employers were expected to cater for the social needs of their staff and along with the social club in Crabwood House and the infamous U25 club, the Restaurant building was originally intended to cater for evening social events. There was originally a stage (located where the Deli Bar is now), however this was removed when the Restaurant was refurbished in around the year 2000. There was also a bar, located to the NE and adjacent to the main entrance; this was removed at some point in the 70s or 80s.

The layout of the counters in the refurbished restaurant was very open-plan, originally, the servery ran along the wall adjoining the kitchen and it was a much more linear process although the advantage of this is that it could be shuttered off from the main dining area when the latter was to be used for evening functions.

In around 1994, the Restaurant was refurbished but it appears that only the servery area was altered – the glazed screen between the servery and the main dining area was covered up and tiled although the glazed louvres at the top remained. New freestanding serveries/till counters were installed to replace the original servery that was technically in the kitchen.

The Restaurant was completely refurbished between early 2000 to mid 2001. During the refurbishment, asbestos was discovered and this had to be removed (any complex of this vintage would have the same problems as the risks of asbestos were not recognised until the 1970s/80s). A makeshift temporary restaurant comprising of portacabins was set up on the grass between Central Block and North Block.

The changes made during the refurbishment include:

The room that later became the ‘Common Room’ was originally a waitress-service restaurant whereas the main ‘canteen’ was self-service.

The flat-roofed dining area facing Romsey Road originally had curtains that could divide it off from the main domed area. The other flat-roofed areas (such as the kitchen offices and the entrance lobby) had some circular roof-lights although some of these were later obscured by modern suspended ceilings.

There was a ‘coffee bar’ in the east corner of the Restaurant (later converted to a disabled toilet) and a ‘sandwich bar’ too, (which are believed to be the same thing). The north corner, where the main entrance lobby is, used to contain toilets although these were removed at some point. The same site later contained a cash machine, although this was removed in the mid 2000s because it was deemed not economically viable by the bank that provided it.

The kitchen area had a clerestory roof (raised roof with side glazing covering it). This raised roof also provided an entry point for the ventilation ducts. It was a fully equipped commercial kitchen and the restaurant served hundreds of staff every day with hot food, snacks and more.

The kitchen area had numerous ancillary rooms around the edge, with windows at high level. There was a rear entrance that gave access to a small loading dock. The original plans show specialised veg prep & veg store, pastry prep, larder, cold room, dry store and also offices for the manager, cashier and chef. There were dedicated staff toilets/changing rooms and storerooms for linen, ‘sullage’, cases, equipment. There was also a large wash-up area. This contained a large dishwasher although I am not sure whether there was originally a machine or just a manual wash-up.

Minor changes to the layout took place in the 70s/80s as the ‘sullage’ area by the rear entrance was converted into an extension to the office, the cold room was removed (standalone refrigerators were used instead) and the veg prep area was partitioned into smaller rooms.

The restaurant building was eventually demolished in the summer of 2012, as part of the site’s redevelopment. One small section of it (around the stairs) remained for several weeks after the main demolition but was finally demolished on Saturday 1 September 2012.