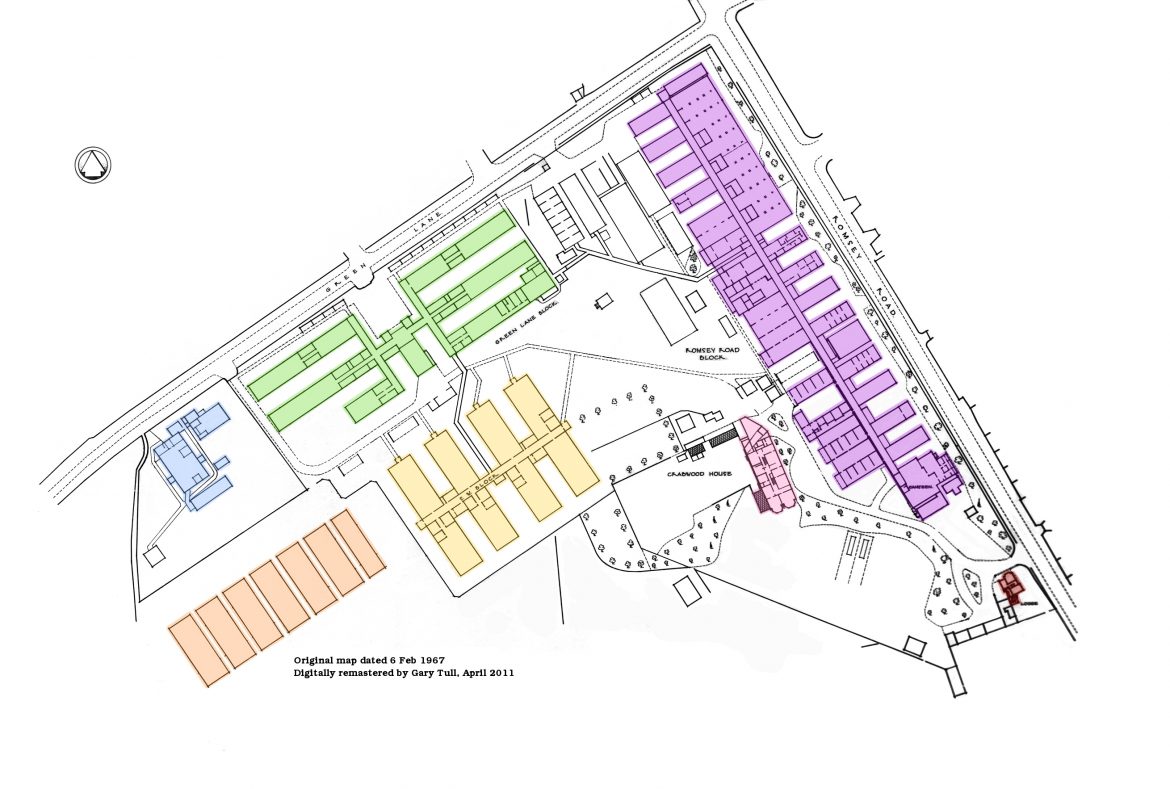 A complex of temporary buildings near Crabwood House was erected in the 1940s and was mainly used for medium- and small-scale reproduction. Some of the huts were demolished immediately after the occupation of the new Maybush buildings in 1968 or 1969 but others lasted until the late 1990s.

Until recently, there was no known record of the exact location of the temporary buildings near Crabwood House (the site being known officially as ‘OSO Crabwood). I was recently delighted to recieve some ‘technical slides’ containing various maps, mainly from the 1960s but some older. These are over 50 years old so not in too good a condition but, as the buildings are long gone, there are no security issues in publishing the detailed maps on these slides.

There are hundreds of slides in the box but as scanning them at a usable resolution takes 5 minutes per slide I have only been able to do a few. The main map is, in my opinion, the best of the slides so I have scanned and digitally remastered it. This process includes some generalisation (necessary as the image files are over 5000 pixels wide!), blanking out dirt/rips etc but also some artistic license (as to me, these maps are definitely a work of art).

Apparently, the map was created in Feb 1967 but I don’t know what purpose it was created for. It is certainly more detailed (showing the interior layout of buildings) than even the most large-scale OS map, but then again, seeing as the OSHQ is probably the most surveyed location in the world, may be just a training exercise for carto/surveyors – or perhaps a way of remembering the old buildings, as in 1967, their days were very much numbered,

The building layout on this map is interesting. I imagine the place must have resembled a huge barracks or military hospital. It was a huge complex of single-storey huts, with the only exception being Crabwood House itself. The Romsey Road block was originally individual wings off a very long corridor but over time, various extensions were made and some of the gaps filled in (as can be seen at the far North of the map). There are several buildings that don’t appear to belong with any of the aforementioned blocks; I think some of these must have been used for storage of maps or glass plates.

The building layout on this map is interesting. I imagine the place must have resembled a huge barracks or military hospital. It was a huge complex of single-storey huts, with the only exception being Crabwood House itself. The Romsey Road block was originally individual wings off a very long corridor but over time, various extensions were made and some of the gaps filled in (as can be seen at the far North of the map). There are several buildings that don’t appear to belong with any of the aforementioned blocks; I think some of these must have been used for storage of maps or glass plates.

Finally, I accept no liability for inaccuracy of the map!

A long row of single-storey huts were put up along Romsey Road – between Green Lane and where North Block is now. These huts had a central corridor ‘spine’ with huts branching off both sides. These appear to have been used mainly for production activities – printing and Helio, and many of the wings were joined together and extended to create a large production floor. At the SE end of this block was a small canteen. There were at least 24 huts here – the central corridor must have been very long indeed.

The Romsey Road block was the first section of the temporary buildings to be demolished – fairly soon after the opening of the new head office building. The SE part of the site was demolished to make way for the North Block car parks. The NW end was demolished around the same time (according to historical 1:2500 scale maps) but nothing was done with it for a while. In the 1980s, a smaller temporary building complex was erected at that end, at the corner of Green Lane and Romsey Road. The maps show this as being ‘Government buildings’ but I have also heard rumours that it was used as a temporary court; see below for more info on that.

In the mid 1990s, the NW end of the site was replaced by housing – known as Kern Close, an appropriate name as kerning is a term relating to printing. Land Registry data suggests these houses/flats were put up around 1996/97.

An alternative theory about the road names given to the residential closes built on the site of the huts is that they are related to surveying equipment manufacturers – Watts, Cowley and of Kern.htm Kern. It is perhaps surprising that there is not a Wild Close either, although perhaps Ordnance Survey did not use any of their equipment.

Where the car park in front of North Block is now, there was a lodge, or gatehouse. This would presumably have been part of the Crabwood House estate. Unfortunately, it was demolished shortly after opening of the new head office building and so were the adjacent houses.

The Green Lane Block, or ‘TOB’ (Temporary Office Building; at least that’s what I assume it stands for) was a large single-storey building used for offices. The main entrance to this was roughly where the driving test centre is now. A corridor perpendicular to the main entrance and on both sides of the entrance hall led to three long office spurs on each side. I am not aware of any photos that exist of the TOB but the entrance hall at least appears to be of an attractive design, unlike most of the very utilitarian huts surrounding it.

The TOB front entrance was in an Art Deco style and looked more like the entrance to a cinema than an office; the boiler house chimney was even disguised as a central tower that brought symmetry to the entrance. If anyone has any memories of the TOB then I would love to hear from you.

While I originally thought that the TOB was demolished at some time between 1969 and the 1980s, it actually appears to have been much later than that, with it remaining until the mid 1990s according to historical maps. It has now been replaced by the driving test centre and houses (Watts Close), both of which appear to date back to around 1997. The driving test centre was originally housed in a different building but I am not sure exactly where. One interesting fact though, is the gates to the driving test centre look exactly the same as the gates to the OS site – this was obviously once an entrance to the OS complex that was here.

Further along Green Lane and next to the TOB was a complex of buildings described as ‘Spraying rooms’. I’m not sure what these were used for (well, spraying obviously, but for what?). These were adjacent to the large electrical substation that is still there but the rest of the buildings have gone to make way for Cowley Close, circa the late 1990s.

Six army-style Nissen huts were located behind the Spraying complex. It is believed that they were originally used by the Ministry of Food as a depot of some kind (wartime probably), but they do appear on plans of the OS buildings at Maybush and were subsequent used by Ordnance Survey as site maintenance workshops. They were also, more notably, used for constructing the floats Ordnance Survey staff used to make for the Southampton Carnival. It appears that they were demolished in the early 1970s, although the concrete floor slabs were left for some years afterwards.

These were one of the more recent additions to the temporary buldings. Located behind the TOB, these two adjacent ‘H’ shaped buildings were used as a drawing office. In later years, they were apparently occupied by the Royal Commission for Ancient and Historic Monuments (RCAHM). The H blocks themselves were not ancient or particularly historic, although they probably hold some memories. They were the last of the main temporary structures to be built and the last to be demolished – in the late 1990s. The site is now occupied by the Green Car Park, however, you can still see the concrete floor slabs.

There were numerous smaller buildings around the large complex already mentioned, including an ‘Open Fuel Dump’ (I hope a suitable risk assessment was carried out!), several air-raid shelters and various stores, workshops and plant rooms. Also, many of the buildings were connected by a covered way, although this was probably a corrugated sheet fabrication rather than the grand concrete port cochere in the new head office building.

It may not be a building, but it is also noted that the rectangular(ish) field between the ‘H’ blocks and Crabwood House was known to many as ‘The Orchard’. Originally an extension of the car park (with the parking spaces between the trees!), this area was later enclosed and until recently was used by the Little Explorers’ Nursery/Playscheme as a play area for the kids.

In the early 1970s, there was a lack of Crown Court capacity in Southampton as the two courtrooms in the Civic Centre were shared by Magistrates courts. Due to an ever-increasing case load, the Property Services Agency (PSA), the government agency that managed Crown property was asked by the Lord Chancellor’s Department was asked to identify sites in Southampton that would be suitable for temporary court buildings. The plan was to build a new courts complex in London Road eventually but as that was not expected to be complete until the 1980s then the NW corner of the former Romsey Road Block site was identified as “the only suitable site”.

The court was on the site of part of the old Romsey Road huts complex, right at the junction with Green Lane. The main courtroom accommodation wings were temporary buildings but the link block was meant to be more permanent as there had to secure accommodation for persons in custody. These buildings were (not surprisingly) very utilitarian.

The photos on this page are from the Ordnance Survey Picture Collection with thanks. The maps and plans are from various sources, including the HMA, and are the basis of much of my research into this. If anyone has any information or memories of OSO Crabwood, I would be very grateful for it.