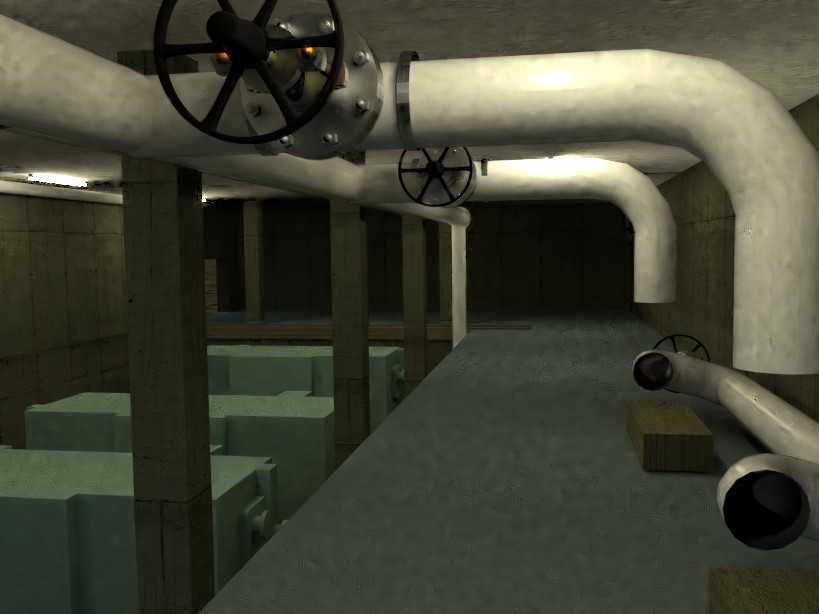 Work on the Staff Restaurant was progressing well until a major spanner was thrown into the works while I was on holiday in Croatia in September…OurWiki was taken down without warning and with it all the reference photos I need for the model!

Luckily I have a copy of all the content apart from what has been updated since early 2016 – I don’t think any photos have been added but a lot of corrections and amendments, mainly relating to the old buildings (OSO Crabwood) I think.

I am still awaiting an update from OS about what has happened and whether this can be restored. If there are issues about some of the content then I am happy to work with OS to remove anything that is preventing them from wanting to/being able to publish it.

The other option is to host it myself, at least the content that I have permission to publish. I already have permission from a couple of people who have contributed photos plus obviously the many I took myself.

I am hoping OS will allow me to publish some of the Photo Library images such as the Maybush Construction and historic repro images. I am happy to do this with the necessary photo acknowledgement.

If OS will not restore the Wiki then I will need a copy of the recent changes for the last two years. If they had notified me of the plans to take it down then I would have been able to make a copy myself.

In the meantime, I could not rest without starting to prepare for a scenario in which the Wiki would not be restored. I always have a contingency plan! I have started adding the photos I have permission to use to this site but it is a major task and will take several months. Much of the work is in the background, cataloguing the images and drafting the pages. I have rewritten some of these and edited the ones I have copied.

As the main reason for needing the images myself is for the model then I have tended to start with the building-related photos – Staff Restaurant and mechanical & electrical (M&E). The Maybush Construction photos are a major source of inspiration but I have been referring to the actual local files. The Mechanical and Electrical photos are another thing I have nearly finished but a lot of the pages they go on have not been started yet.

There are some advantages to this process. The Wiki was established nearly 10 years ago and had some drawbacks, being its rigid structure made it difficult to customise some things and some people commented that it was not particularly user-friendly. Pages on this WordPress site are far more customisable and the layout can be changed. It is also possible to have multiple photo galleries on the same page. The search facility was very limited and a lot of the images were resized to 800 x 600 or smaller. Technology have moved on so its high time for adding higher resolution images.

The disadvantages are obviously the tremendous amount of work needed to set this up but also one of the main benefits of the Wiki was that anyone (who registered) could add/edit content; however, in reality, Ian Corps and myself added the vast majority of the content, with help from Guy Heathcote and others in Research in setting up the structure and customising the templates for us. With WordPress it is definitely possible to add other users to share the load but it’s not at that stage yet.

I have needed to make changes to the structure of the image databases to accommodate an extra field for photo subject date and photo acknowledgement and also added a system of categories and tags; this makes it very easy to find photos and makes it possible, for example, to add a gallery to a page and select all the photos with a category of Staff Restaurant or can use the tags search to find images tagged with catering. Multiple categories can be assigned to images.

However, the biggest advantage I think is the search facility. The search facility with the Wiki was very limited; you could search for pages fairly easily but the image search needed you to use advanced search and tick the File option, which was rather clunky. With WordPress, the search function is much more straightforward and you can type into the search box at the top of every page. This will search the image description/caption and also search pages.

Little progress has been made to the Staff Restaurant model as cataloguing the M&E photos has inspired me to have another try at sorting out the pipes in the Refrigeration Plant. There are no plans on file for this so much of it is guesswork from the photos.

I have been trying to figure out for ages whether each chiller had its own dedicated cooling tower or if they worked in parallel; the only original plan I have shows concrete plinths with two cooling tower water pumps per chiller but the original construction photos appear to be much the same as the layout in 2010. The mechanical top parts of two of the chillers were replaced in the mid 90s but the original bodies and therefore input and outputs are the same. The original plans of the cooling tower compound show separate pipes for each cooling tower but a later plan and my 2010 photos show just one pipe for flow and one for return. This considerably simplifies things at both ends!

I have added the main chilled water header in the Refrigeration Plant and am not far away from being able to do the same for the cooling tower headers (flow and return). I am working with a copy of the main model as I do not want to add experimental objects – once finalised, I can import the components to the master model.

This work has identified some issues with my original gate valve model so I have tidied up the mesh and created some variations with the handle – high res images of the plant room have made it easy to model this to exactly the same as the real ones. I have size issues though (joking aside) – the width of these pipes and valves is unknown so will have to be guesswork. The valves for the chilled water pipes are much simpler as they are enclosed in a box of insulation (what appears to be white plastic) so just the handles need making!

The pipes connecting the chillers to the header pipes will have to wait or be left incomplete until a model of the chillers has been created – a major job owing to their complexity and lack of photos of the back.

Next steps – finish this stage of work in the refrigeration plant (up to 3 evenings) then try and focus on the Restaurant’s doors and internal windows then the roof – I have some structural diagrams but creating a good model will be very complex. The existing ‘temporary’ roof will do for now but something needs to be done at the bottom internal corners.

Documentation – I have started redrawing the ‘Master Control Diagram’ in Visio – this is a simplified schematic showing all the site’s heating, hot tap water, chilled water and and condensate (cooling tower water) but this has thrown up some discrepancies with the actual services. This is what prompted my review of the Refrigeration Plant.

As well as the chillers being incorrectly shown as having their own dedicated cooling tower, there are a few other things that appear to be incorrect – it was originally planned for the whole building to be air-conditioned – there were meant to be chilled water pipes to H core, E core and F core penthouses (H and E core ‘s pipes would have gone through the LG floor ducts from K to E and H). These were either removed at some point or more likely were never installed. I am not sure whether the air handling units in these penthouses actually had a cooler battery. If they did then  in theory it would have been possible to install pipe connections. That would have added a lot of extra stress on the Refrigeration Plant.

There were also four chillers and four cooling towers on the Master Control Diagram but only three were ever installed as far as I know. There were plans at an advanced stage to add an absorption chiller in the early/mid 2000s but the plans to redevelop the site would have put any further investment on hold.