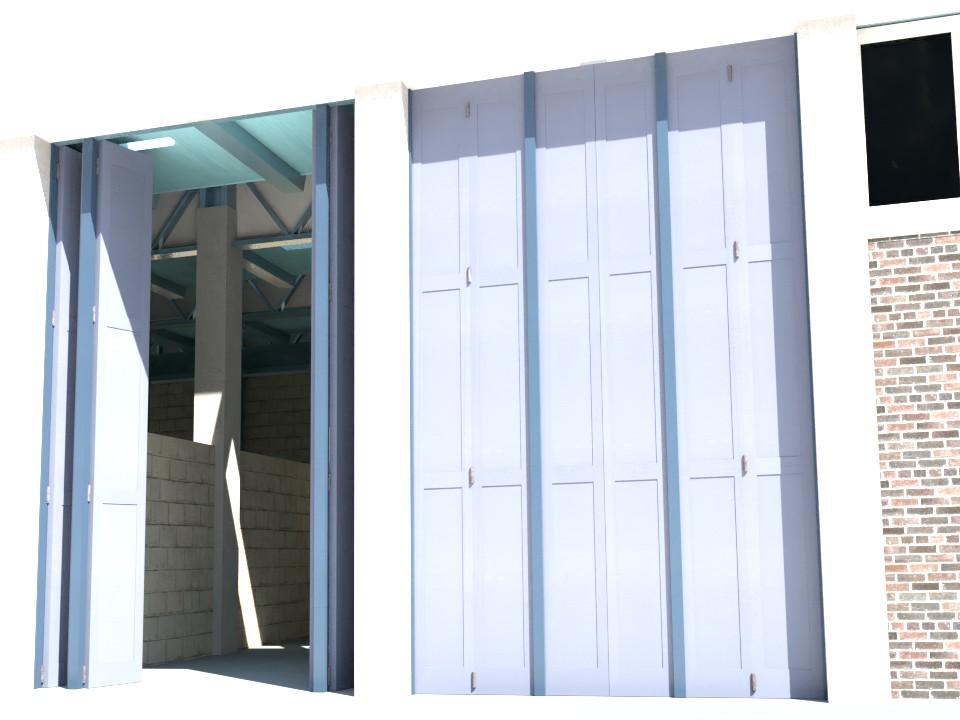 I have gone off on a tangent in the last couple of weeks after seeing images of my Services Block model pop up on Facebook memories. This appeared to largely be finished but as with the rest of the rest of my models, there were issues when I revisited it in Blender.

I thought I could just replace bits and pieces but it became apparent that the scale was incorrect. The grid spacing was incorrect and slightly out of proportion with the rest of the Maybush complex. After some complex calculation and studying the engineering drawings, I found the correct grid spacing (between the centre of the columns) was 16 feet and 6 inches and the columns to be one foot square. (VERIFY)

The other issue was the fact that Services Block was in the wrong place relative to the main OSHQ model (Central & West Block) so I have now corrected that and put the new grid in the right place.

The first job I tackled was fixing the folding doors. The existing model was reusable and I tried to add ‘constraints’ to the various parts (each leaf of door was a separate object as were the sliding posts and frames and Blender allows constraints that limit rotation to a certain angle range (so allowing them to move as if they were real hinges and also allows the different parts to move at the same time. I experimented with making these into ‘armatures’ that allow animation but sadly I had no success.

The finished doors were built to the original scale so will need correction. I am not sure what colour the original doors were but it appears that they had not changed much so I used the original two-tone blue for the interior faces of the doors (which could be seen in the former garage and Bilby Store areas) and outside the light blue for the doors and a darker shade for the posts as suggested by the Maybush Construction photos.

The main job is rebuilding the main girder beam steelwork, the original was not correct and would need rescaling anyway. I plan to build one bay then use an array or instancing for the rest of it.

I have also added the materialiq materials to Services Block as the painted wood materials will look great on the doors and the general concrete screed textures will avoid faffing about with UV mapping the floor slabs.

Amended the spraying booth area (roughly where the Playscheme was) that formed part of my 2012 ‘PARTY’ interior scene. The various metal materialiq materials look great in here.

The metal windows and doors have FAR too thick frames. I am hoping these are similar to those I made for the Restaurant as that will save a lot of time. The snag is that the high level windows pivot at the centre, which means complex window frames of the type I have not used here but I have found some I created for another model that may be the foundation for these.

And finally…further changes are on the horizon with a major new version of Blender, v2.8. This been on the horizon for a while but is now available as beta so I have downloaded it and taken the plunge in editing one of my non-OS models. It will save me a lot of time and the collections/layers is what I have been yearning for ever since migrating from 3DS Max, Blender currently only allows 20 layers,which cannot be named and are not at all intuitive. I have been monitoring this on a Blender Facebook group and some users have already moved to 2.8 for production…I am not quite ready to take the plunge and use 2.8 for my production work (ie OSHQ Maybush) but it won;t take much to persuade me to do so.